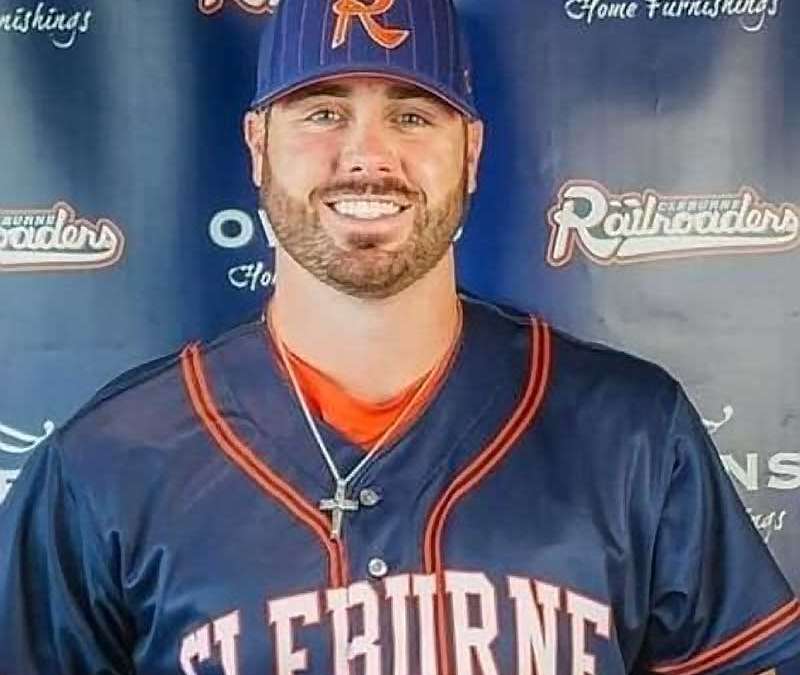 Burleson residents have been cheering for Levi Scott on the ball field since 2008. For the second year in a row they can continue cheering for him as he plays for the Cleburne Railroaders. Locals will remember Scott as a standout and two-time District MVP on the Burleson High School baseball team from 2008- 2011.

Scott started playing baseball in the same way as the young boys who are now watching him from the stands. He fell in love with the game as a child. He actually had an affinity towards football first but as he got older, he and his family recognized his natural talent as a baseball player and he began to concentrate on that sport. Scott played on select baseball teams, which opened up the opportunity to travel across the country and compete with ballplayers who have also found success in professional baseball. He played local baseball and helped lead the Elks at Burleson High School deep into the playoffs multiple years until he graduated in 2011. After graduation Scott began his collegiate baseball career at Howard University, where he played for two years. Known for his strong bat and defensive skills in the field, the Baltimore Orioles drafted Scott in the 21st round in 2013. He opted to transfer to the University of Texas in Arlington to continue his college career for the next two years. In 2015 he was drafted by the Toronto Blue Jays and Scott played in the Blue Jays system for two years. He came home to Texas where he played for a year for the Texas Air Hogs. In 2018 he joined the Independent Baseball Association’s Cleburne Railroaders, where he was named the Position Player of the Year in his first year. He continues with the local team for the 2019 season.

Playing for a hometown crowd is something special for the first baseman and outfielder. The Cleburne Railroaders play at the Depot at Cleburne Station, which is just a short drive from Burleson. Scott can look into the stands during any given game and see several people he knows. His goal for playing the game remains the same as when he was working his way through the Blue Jays system, but Texas holds a completely different atmosphere. He has the support both in and out of the stands by those closest to him. That atmosphere brings a sense of calm and renewed fun as he works towards his goals of playing affiliated baseball once again. Scott stays involved in the community both as a representative of the Railroaders and on his own. He passes his experience and skills onto the next generation through giving lessons and sharing his insights in working up the baseball system.

Baseball has been a significant part of Levi Scott’s life for over two decades. It has required dedication from a young age and sacrifices to reach his goal. The passion for the game is still just as strong and continues to motivate him. His career in baseball has brought a lot to his life: opportunities to travel, the chance to earn a living doing something he enjoys, and priceless relationships along the way. One of those relationships is with a current teammate who also happens to be a former Texas Rangers legend that Scott watched growing up. The Cleburne Railroaders have MLB All Star and Gold Glove winner Rafael Palmeiro on the roster. Scott speaks with awe that he gets the opportunity to play baseball with a man who has achieved something only six people in the world have managed to do- being a member of both the 500 Home Run Club and 3,000 Hit Club. Scott describes him as “one of the best guys I’ve been around” and gets the opportunity to hear insider stories from a man who is one of the greats in MLB history.

Opening Day for the Cleburne Railroaders 2019 season is May 16. When asked why people should come out to The Depot for a game, Scott answers that it is simply a great environment to watch a game. It is relaxed and enjoyable for families and a fun night out for adults. Baseball fans will have a good time watching this relatively new ball club. They have new ownership and coaching this season and a lot of talent on the roster, making this a promising year for some really good baseball. Levi Scott and the Railroaders invite you to come on out and “Jump on the Train.”