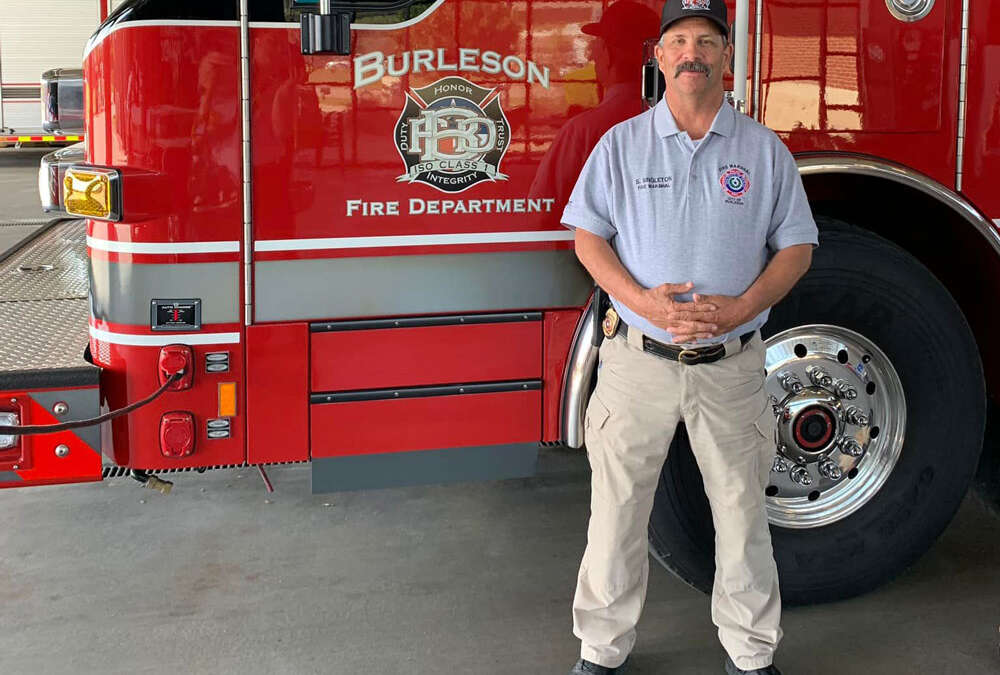 Stacy Singleton is officially retiring as the Burleson Fire Marshal, a position he has held for nearly 32 years. “Growing up I never expected this path for myself. I started as a volunteer firefighter in 1984 and the rest just kind of fell into place. I became Fire Marshal in 1991. It’s been a wild ride and I’ve enjoyed watching our city grow that whole time. I’ve lived here my whole life, and watched Burleson grow from a small town into a community that is 50,000 strong. It’s been really cool seeing that happen from this position.” For over three decades Stacy has worked closely and built great working relationships with both the Fire and Police Departments. He has been responsible for writing many and enforcing all of the fire codes, and spent a lot of time out in the community educating the public on the importance of following those codes. He has worked hard to bring citizens into code compliance, thoroughly investigated fires and worked to hold accountable those who needed to be. He was even a part of the regional response to the explosion that rocked West, Texas claiming 15 lives in 2013. He took the mobile command truck to West in order to provide critical assistance in the aftermath. He has worked diligently to build his office up over the years and is very proud of the grants he worked so hard to secure for the city. “Overall, this job taught me how to treat people. We just need to treat people right. It’s amazing how much code compliance you get when you just treat someone decently.”

The role of Fire Marshal has kept Stacy incredibly busy over the years with long hours and a lot of holidays and weekends spent working. In fact, this next Fourth of July will mark the first time he gets to spend the holiday off of work since taking the position nearly 32 years ago. Knowing that, it comes as no surprise that his wife Janet, who also served the Burleson community for 31 years as a teacher, is very excited for Stacy to join her in retirement. It may not have been a path that he envisioned for himself but it’s one he has walked well, and one that also seems to have inspired his son Tanner, who has followed in his father’s footsteps and is currently serving the Burleson community as a firefighter. It was a decision that Stacy and Janet were both thrilled with, and that excitement seems to come second only to the fact that two days after Stacy’s retirement, Tanner will marry a young woman who they think the world of. It is a big season of change for the Singleton family, but they are so excited to welcome Chandler into the fold and enjoy retirement life all together. When asked what their retirement will look like, Stacy mentioned that they had just brought home a travel trailer that they plan to put to use very soon with their son and new daughter in law. “I am excited to step into retirement. I’m a little apprehensive, and I’ll miss the camaraderie here, but I’m excited.” For many growing up in Burleson, Stacy has been a seemingly permanent fixture in this community with his years of service, and although his retirement has been well-earned, he will certainly be missed. He assures us that he isn’t going far. “I still have a heart to serve this community. I’ll find a way to continue that.”

We here at Local Life want to join in with the Burleson community to wish a hearty Congratulations to the Singleton Family! We are incredibly grateful for your many years of service to our community and wish you all the best as you begin this next chapter!